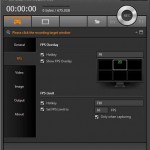 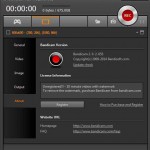 Record Everything (Game + PC screen) and save it as AVI, MP4 files. Bandicam is the best Game, Video, and Desktop Screen recording software. You can record WOW, Minecraft, iTunes, YouTube, PowerPoint, Webcam, Skype, Video chatting, Streaming video and the desktop screen without lagging. Bandicam compresses the video while recording and uses much lower CPU/GPU/RAM usage, and it fully supports the hardware accelerated h.264 encoder of Nvidia NVENC/CUDA, Intel Quick Sync video and AMD APP which allow video to be recorded in high speed, with a high compression ratio and excellent quality. As a result, it has less lag and you can save your HDD and CPU. Bandicam displays FPS number in the corner of the screen while it is active in the ‘DirectX/OpenGL window’ mode. It also can record video at resolutions of up to 3840×2160 in high quality (2160P UHD video can be made) and your webcam stream will be simultaneously recorded and merged with the game / screen recording (Picture-in-Picture, Video-in-Video). In addition, Bandicam supports a real-time drawing function which allows users to draw lines, boxes, or highlights while recording the computer screen. You can upload the recorded file to YouTube without converting because the recorded file size is much smaller than other software. Bandicam supports AVI 2.0, the maximum file size is unlimited as long as the local Hard Disk has free space available (Over 24 hours recording can be possible). Furthermore, Bandicam, when in desktop recording mode, supports the real-time highlighting of the mouse cursor and mouse click effects, a feature which competing software lacks. When these mouse effects are used in conjunction with simple microphone recording, Bandicam is the ideal screen recorder for making tutorials.