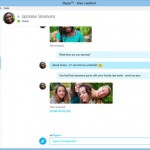 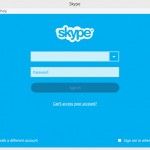 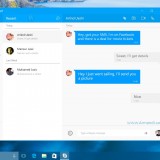 Skype (/ˈskaɪp/) is a telecommunications application software product that specializes in providing video chat and voice calls from computers, tablets, and mobile devices via the Internet to other devices or telephones/smartphones. Users can also send instant messages, exchange files and images, send video messages, and create conference calls. Skype is available to download onto computers running Microsoft Windows, Mac, or Linux, as well as Android, Blackberry, iOS, and Windows Phone smartphones and tablets. Much of the service is free, but users require Skype Credit or a subscription to call landlineor mobile numbers. Skype is based on a freemium model. As of February 2012, there were 34 million concurrently online on Skype; at the end of 2010, there were over 660 million worldwide users with an average of over 100 million active each month. First released in August 2003, Skype was created by Dane Janus Friis and Swede Niklas Zennström in cooperation with Estonians Ahti Heinla, Priit Kasesalu, and Jaan Tallinn, who developed the backend, which was also used in music-sharing application Kazaa. In September 2005, eBay acquired Skype for $2.6 billion. In September 2009, Silver Lake,Andreessen Horowitz, and the Canada Pension Plan Investment Board announced the acquisition of 65% of Skype for $1.9 billion from eBay, valuing the business at $2.75 billion. Skype was later acquired by Microsoft in May 2011 for $8.5 billion. Microsoft’s Skype division headquarters are in Luxembourg, but most of the development team and 44% of the overall employees of the division are still situated in Tallinn and Tartu, Estonia. Skype allows users to communicate by voice using a microphone, video by using a webcam, and instant messaging over the Internet. Skype-to-Skype calls to other users are free of charge, while calls to landline telephones and mobile phones (overtraditional telephone networks) are charged via a debit-based user account system called Skype Credit. However, some network administrators have banned Skype on corporate, government, home, and education networks, citing reasons such as inappropriate usage of resources, excessive bandwidth usage, and security concerns. Skype originally featured a hybrid peer-to-peer and client–server system; however, since May 2012, Skype is entirely powered by Microsoft-operated supernodes. The 2013 mass surveillance disclosures revealed that Microsoft has granted intelligence agencies unfettered access to supernodes and Skype communication content. (Source: Wikipedia EN)