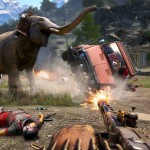 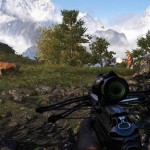 Far Cry 4 is an open world action-adventure first-person shooter video game developed by Ubisoft Montreal and published byUbisoft for the PlayStation 3, PlayStation 4, Xbox 360, Xbox One, and Microsoft Windows. The successor to the 2012 video gameFar Cry 3, it is the fourth main installment in the Far Cry series. The game was released in North America, Australia, and Europe on November 18, 2014; it was later released in Japan on January 22, 2015. The game takes place in Kyrat, a fictional Himalayan country that mostly consists of sprawling mountains and forests, vast water systems, and villages that house Kyrat’s citizens. The main story follows Ajay Ghale, a young Kyrati-American, as he is caught in a civil war involving Kyrat’s Royal Army and The Golden Path. Gameplay focuses on combat with enemies and exploration; players battle enemy soldiers and dangerous wildlife using a wide array of weapons, while completing side missions, collecting useful items, and journeying through the game’s main story. The game features many elements found in a role-playing game, such as a branching storyline. In addition to the game’s campaign, the game features a map editor, a co-operative multiplayer mode and an asymmetrical competitive multiplayer mode which was developed by Red Storm Entertainment. Announced in May 2014, development on Far Cry 4 began immediately after the shipment of Assassin’s Creed III in late 2012. The team originally intended to develop a direct sequel to Far Cry 3 and continue its story, but the idea was later scrapped and the team decided to develop a new setting and story for this installment. Certain aspects of the game were inspired by the Nepalese Civil War, and the costume of the game’s antagonist Pagan Min was inspired by Ichi the Killer. Cliff Martinez composed the game’s soundtrack. Far Cry 4 was met with a mostly positive critical reception upon release. Critics praised the open world design, visuals, soundtrack, characters, particularly antagonist Pagan Min, the new gameplay additions, such as the grappling hook, and the wealth of content. However, some critics disliked the story, and found the game too similar to its predecessor Far Cry 3. The game was a commercial success, selling 7 million copies by December 31, 2014, making it the biggest launch in the franchise’s history. Four downloadable content expansions, namely Escape From Durgesh Prison, Overrun, Hurk Deluxe Pack, and Valley of the Yetis were released upon launch. wikipedia